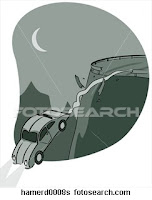 
Dream: 0630, October 3, 2009
Scene a. Driving a car fast on a curving road like coming down the main hill from the mountain plateau of Los Alamos. There is one male passenger. Suddenly, I loose control of the vehicle and it veers into the cliff side to our right and dissolves. As we dissolve I think, "It's over. This is the end of it all…" CREEI Score: +?+??-//--+/++? Anticipatory-Traumatic

Scene b. The scene abruptly changes and the passenger and I are walking along a flat road in open territory wondering what has just happened. I do not recognize the man, who is wearing a white shirt. We are not injured in any way as I remember the car crash, but I am aware that I no longer have my notes, books or vehicle…. I do not know where we are going. CREEI Score: +?+++?//+++/+++ Anticipatory

What are three fundamental life issues that you are dealing with now in your life?
Being Authentic and creative
Reconciling with the human family: friends and foes
Being open to the leading of the Holy Spirit

Tell me a dream or experience you remember...
See the above two scenes.

Why do you think that you had this dream?
In addition to the writings of Ken Wilber and Joseph Dillard plus recent personal conversations and exchanges with Dillard and my three active Mormon high priest Crystal Group brothers Ken, Rex and Clark, I have of late been heavily influenced by the writings and revived exchanges with an old friend, Arnold Mindell, who speaks of "edges" or obstacles in one's inner and outer life. [See Recontacting Arnold Mindell.] Also, I have felt prompted to open new dialogs with various religious traditions. [See Discourse with the Jews] At the same time I have been increasingly involved with the local Orthodox parish as a new member of the parish council in helping it grow as a community and deal with its immediate growing pains. [See: The Maestro's visit].

If it were playing at a theater, what name would be on the marquee?
Dissolving into Mission

These are the characters in the dream…
Scene a. Car, curved mountain road, cliff, passenger
Scene b. Open terrain, straight highway, male companion in white shirt

If one character had something especially important to tell you, which would it be?
Male companion in white shirt

Character, would you please tell me what you look like and what you are doing?
I am about Eugene's size and am wearing a white shirt. I have been sent to keep Eugene company and offer him counsel and protection when he needs or asks for it.

Character, what do you like most about yourself in this experience? What are your strengths?
I am from the angelic realm with instructions to aid Eugene. My strength is my connection with the divine mind.

Character, what do you dislike most about yourself? Do you have weaknesses? What?
I dislike nothing about myself and am secure in my assignment.

Character, if you could change this dream in any way you wanted, would you?
Not at all.

Character, if this dream were to continue, what would happen next?
Eugene has just experienced a collision with an edge, which has stripped him of all his familiar props. He is now in wide open space, walking with me in new territory. He and I together are missionary companions traveling "without purse or script" and open to whatever happens. We are equipped to respond as needed.

Character, if you could be anywhere you wanted to be and take any form you desired, would you change?
No.

Character, you are in Eugene’s dream, correct? He created you, right?
Yes, I am in this dream as I have been in others. But no, he did not create me.

Character, what aspect of Eugene do you represent or most closely personify?
I am the spiritual brother he has wished and prayed for all his life.

Do you have a name?
Brother Whiteshirt will do.

Character, how would you score yourself 0-10, in confidence, compassion, wisdom, acceptance, peace of mind, and witnessing?
Tens all.

Character, how would Eugene’s life be different if he naturally scored high in all six of these qualities all the time?
He would fulfill his purpose in this life and accomplish the work that has been assigned to him.

If you could live Eugene’s waking life for him, how would you live it differently?
I would not live it differently, that is not my job. I am here to comfort and counsel him, but have had to wait until he reached a level of spiritual maturity that allowed him to see me.

If you could live Eugene’s waking life for him today, would you handle his three life issues differently? If so, how?
His issues are right for him at this moment. It is not for me to "handle" them.

Character, what three life issues would you focus on if you were in charge of his life?
Not mine to say.

In what life situations would it be most beneficial for Eugene to imagine that he is you and act as you would?
Eugene has invited his family and friends and even strangers to critique his life and purpose. I am here to help him respond with the core qualities you have outlined, Joseph. In addition I help him evaluate the counsel of his new and old friends as well as deal with the attempts to marginalize his growing awareness and understanding by those who are unable to value his purpose..

Character, why do you think that you are in this dream?
I have just answered this question.

Eugene, what have you heard yourself say?
I am not sure I have said much. But if I have it is that I am determined to reach higher inner levels of wisdom and respond to my life and the lives of others with the core qualities Joseph has presented.

If this experience were a wake-up call from your soul, what do you think it would be saying to you?
Be ready for anything, Eugene (Arseny Pavel). You are now equipped to handle it.

On October 7, 2009 11:43 AM, Joseph Dillard said...
Dear Eugene,
If this were mine I would feel that I now had a clarity of inner support that I have longed for but not accessed. I would say that a "spiritual psychokinesis" was happening in my life, in that I was moved "physically" out of harm's way by alignment with that part of myself/the universe that scores tens in all six qualities. Namaste, Joseph

On October 7, 2009 1:30 PM, I responded
Thanks Joseph, I like your term "spiritual psychokinesis", which I'll shorten to "SPK" and which gives me more to consider regarding my pending RPK experiment. Also, I changed the dream title on the marquee from "Car crash and wandering" to "Dissolving into Mission". Namaste.

Subject: Dissolving into and through an Edge!! Through QM chapter 22

Here is my process update report through QM Chapter 22: Hyperspaces.
In QM Chapter 19 you began to sound like teachings from some good old NCR Mormon stuff by its founder Joseph Smith! “As man is now, God once was; as God is now, man may become.” Heresy to most people two centuries ago and undoubted too narrow a view now, but pretty good for an unschooled guy in the 1830s. However, that last page in Chapter 22 was as clear and resonating as anything I’ve ever read! In sharing it with my local, shamanic 79-year-old Orthodox priest this morning, he lit right up!! THAT is where he and I both live!

Researching the patterns of the universe and connecting them with spiritual traditions everywhere is one of my greatest passions. Thanks for understanding and good luck in Los Alamos, arny also from amy

Posted by Eugene at 2:09 PM No comments: