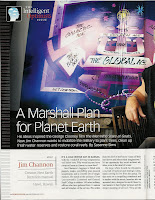 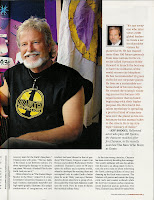 When I read this article about actor Jeff Bridges' character in the current movie Men Who Stare At Goats in a magazine received the day before Christmas Eve, I laughed out loud! How timely and appropriate!

If you read carefully, you will see mention of Jim Channon's commanding officer. Victoria, the wife of that officer once kept my RPK device on a table in her living room in Santa Fe as a conversation piece. She told me that it never ceased to evoke lively discussions. I'm tempted to call Victoria's experience Women who stare at hanging objects! HarHarHar! When she returned the device to me after several months, it had undergone an inadvertent fall off her table with the result that one of the tiny 1-inch long links in one of the two spring assemblies was missing. That is why the red object now hangs at a level one inch above the silver object. See: 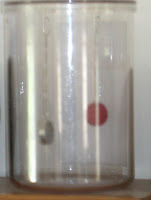 The second RPK experiment is nearing operational status. The above RPK device has now been modified so that the objects again hang at the same level. (One spring link has been removed from the spring chain attached to the silver object.)
.
.
.
.
.
Posted by Eugene at 2:04 PM No comments: 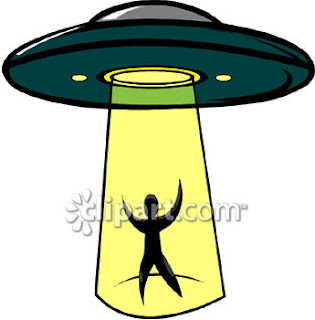 In reflecting on the origins of my most recent attempts at an RPK (remote psychokinesis) experiment, I recalled an intense dilemma long ago when I first began trying to reconcile what my heart was witnessing to my head. I was then a professional physical scientist.

The moment was on April 23, 1965, during work at General Atomic Laboratory in La Jolla, California. I had just received a newly published book titled Truth by Reason and by Revelation sent to me in care of the laboratory by LDS friend and mentor Howard E. Salisbury. The author was his nephew Frank B. Salisbury, a respected professor of botany at Colorado State University (now retired from Utah State University in Logan).. Howard wanted me to review the book from the perspective of a fellow believing Mormon scientist.

Prior to that day, my opinion of the subject of Flying Saucers or UFOs was that it was silly and a product of social hysteria. Not to be taken seriously. Yes, I was aware of Carl Jung's essay Flying Saucers, a Modern Myth, and let it go at just that. However, as I got into Frank B's book I came across a chapter on UFO's that intrigued me.

This stuff is not new, he wrote. Just take a look at ancient scriptures of all kinds and note the images. Forget the explanations. Just consider the images: Ezekiel, Isaiah, etc. Then compare them to the images being described by witness accounts these days. Lots of similarity.

Frank B. was writing in language and logic that I understood and accepted. I was no longer able to dismiss or marginalize what he was presenting. So, I approached my brother Virgil who was a US Air Force officer for information from the Air Force point of view, rather than more sensational newspaper accounts. I wanted something from inside the military arm that ought to know about such things, if any agency should. I knew nothing about what my brother had undergone after my memo to him of February 1965, but he nevertheless reluctantly responded to this new request a few weeks later.

What he gave me were two or three obscure newsletters written by a local man named George Adamski, who claimed personal contact with beings from extraterrestrial spacecraft. My brother made his personal opinion clear to me. In effect he said, "The guy is a kook. That is all I'm going to give you. Don't bother me with this stuff any more."

Although Adamski's newsletters to his followers were crudely written, they had a ring of truth to me. I couldn't write him off as a kook as did my brother. A few days later I became aware that Adamski had written three books, all of which were on the San Diego Library shelves. I checked them out and read them all. Their titles were: Flying Saucers have landed; Inside the Spaceships; and Flying Saucers Farewell.

I was profoundly affected by Adamski's story. "This guy is not making this stuff up!", I thought and decided to find him to see if he would come across to me eyeball to eyeball as he did in his books. It didn't take long before I learned that George Adamski had died on April 23, 1965 in Bethesda, Maryland--the very day my fascination began!

This synchronicity startled me.

Having no longer available someone claiming such experience to talk to directly, I began to wonder if there was an experiment I could design that help resolve my dilemma. If such an experiment were conceivable, I reasoned, it must meet three criteria, else I would not pursue it. The three criteria were: 1) it must be simple; 2) it must be direct; and 3) it must be self-evident. If those three criteria could be met (so I promised Providence in wondering about it), then I would not prejudice my mind further. I would follow my instincts where ever they lead.

Little did I know what I was opening myself into!

That was mid-May 1965. By the following mid-August a first image of my experiment came to mind in a dream, but which I had a hard time taking seriously. It seemed TOO simple! Nevertheless, later that same afternoon I was surprised to experience a personal sighting of the kind of spacecraft that I had been reading about. (See my archival blog accounts of those intervening events.) That seemingly too-simple dream image, plus the anchoring experience of the sighting, together with other unusual experiences that began to occur in my personal and professional life since then, has led me to the RPK experiment mentioned above more than 44 years later! Simple, direct and self-evident criteria, indeed!

Someone has said recently: "Time is quick, but life is slow". Or is it the other way around?

One might think that these intervening years with all their ups and downs and delays and detours would be enough to deter my intent to play this thread out. We shall soon see. Who knows? They might be the ravings of a madman after all. ;-) But, what a life's ride it has been--and continues to be!

Oh, my poor family and friends....