Implications of the RPK experiment

Preliminary design light box containing RPK device with two surveillance cameras mounted at right angles to the cylinder on a base plate. 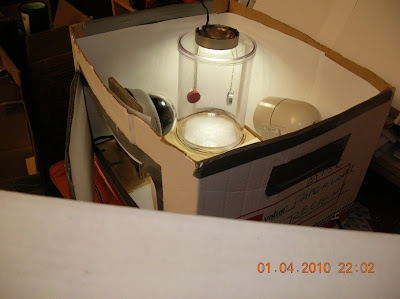 This RPK thing is far more than mere scientific curiosity for me. It is my path for pursuing "Truth". As my first poem began to compose itself in November 1964, before I was aware of where I was heading, I wrote: "He stands upon a hill, surrounded by a mountain. Trembling, yearns for Truth to ponder...."

What did the fledgling poet mean by "Truth" with a capital T back then? It was more of a feeling, which he could not describe beyond the compelling experience of writing verse. To most it probably means "scientific" truth or "consensus reality" (CR). To others it means "spiritual" truth or "non-consensus reality" (NCR). For me these days that word "Truth" includes all reality: physical, spiritual and potential. This includes all ideologies, traditions and experience. It is all that is, was and will be. It is anything in time as well as beyond time. Some would speak of the Isness and the Isnotness. Others, such as in Orthodoxy, refer to the Infinite, Unfathomable Father. Still others speak only of the Ultimate Source.

These ideas update my credo poem "As if time existed" written on October 20, 1965. They include three words that have come forcibly to mind in new way during the past few weeks. I have not yet used these words in poems, but I believe they are at the heart of this RPK enterprise. The words are: Life, Light and Love, which are words most commonly used by philosophers, poets, mystics, ecclesiastics and religionists of all kinds.

That said, allow me to share an aspect of this journey that brings me the most hope and satisfaction. It is working with family and friends. As I journey towards an uncertain future with wife Birgitta, various families and friends, sometimes stumbling and sometimes falling into pits, I need the stabilizing help of others, such as my second son James. Allow me to post a recent letter to him, which he says he does not mind my sharing, so long as he is able to add disclaimers. ;-)

I want to write something for the record that just occurred to me, as you and I work out practical details for getting the RPK experiment up and running.

It is exciting to me to have you interested and involved! Your suggestions and questions are helping me advance this project in significant ways. I have always needed an intuitive technician to help me with my experiments and projects, whether at Lawrence Livermore National Laboratory, General Atomic [La Jolla], Brunswick Defense [Santa Ana and Costa Mesa], Hot Section Technologies [Ventura and Santa Paula]] or the Los Alamos National Laboratory. And to have you, my own son, become one of these technicians gives me a deep sense of satisfaction.

I am not generally good with the nuts and bolts of things, as you know, except for the two times I had to demonstrate my capacity to be a technician on my way to becoming a professional engineer and research scientist. These were at UC Berkeley, when I was a paid undergraduate technician to graduate student Bill Scott and built the first hard vacuum system in the Department of Mines and Mineral Industries in the School of Engineering that didn’t leak. You were about one year old. The second example was at the U of Utah when I built a hot stage microscope system to demonstrate an intuitive NCR (non-consensus reality) flash I had had about my doctoral thesis subject during the very first quarter of graduate school. You were then almost three. It took me almost three additional years to produce CR (consensus reality) results to an NCR experience--an image--that I would not dismiss or allow to be marginalized. During those three years I had to learn how to describe the behavior of the mechanism I had envisioned in mathematical terms and then build reliable equipment to test it experimentally.

That is what we are doing here, even though the time between the first dream image and now is almost 45 years!

I do not know if or how the results that I am seeking in this RPK thing will play out, but this is the only way I can envision to produce CR results to give an objective opportunity to capture my long-go NCR experiences of 14 June 1964, 17 July 1965 and 14 August 1965, which your younger brother Michael and others dispute as anything more than delusion.

When I made my first attempt to check out the 14 August 1965 NCR experience in my laboratory at General Atomic, I was given one chance and it failed. That destabilized my position at GA. I was not given an opportunity to adjust my thinking and modify my approach before all hell broke loose in my professional life and then in the life of our family. I was put under house arrest in my office until I agreed to be taken to see a psychiatrist at UCLA. All this, of course, is an old story to you.

Nevertheless, I believe that had I been allowed to pursue this line of experimenting back then, as we are at present, I’m confident it would have come to closure. Either I would have discovered that my path was leading nowhere or else it would have led to some more interesting result. I hope what we are doing together will lead to more interesting results. The worst that can happen is nothing. And if nothing keeps happening as we proceed through the experimental stages that have now become clearer in my mind, eventually we may simply give up before I die. NOT! (Come to think of it, we are already doing something interesting in terms of relationship building!)

Thank you, my dear son Jim, for sticking with your strange dad and helping him move into and through his determination to check out the NCR end of a rainbow!