RPK device in light-tight box with door open.
Note monitor below + DVR PC to its right.
Note also the painting in the background. 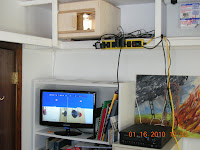 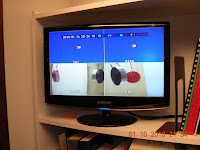 Sunday, 17 January 2010
The DVR (digital video recording) equipment is up, running and ready for phase two of the RPK experiment. When Norma is ready in whatever way she feels is appropriate, the PC hard drive will be cleared of all past test recordings. We will then launch "Phase Norma" and give Norma an agreed upon time to do her thing, say two weeks, during which time she will keep email contact with us here in Los Alamos. Depending on the results of this second phase, we will modify the second phase and/or design a third phase activity.

Incidentally, the light trap box was built by son James out of Baltic birch, which is light enough in color not to need to be painted white. He thought Baltic birch had symbolic significance for me, which makes me smile. "The birch tree" is the name I use for my favorite Russian folk song, which I love to sing a Capella and which is the melody that inspired Tchaikovsky's Fourth Symphony.

Tuesday, 19 January 2010
Today I reviewed all previous incidents video-recorded on the DVR PC hard drive for any movement that looked anomalous. This was IN CASE Norma's practice attempts had been successful. .

In all there were 63 separate recorded incidents beginning on 11 November 2009, through this evening 19 January 2010. All incidents seemed due to lighting changes and/or mechanical adjustment upgrades that activated the record mechanism. To eliminate lighting changes affecting the experiment, we have installed the RPK cylinder plus two dome cameras at right angles in a "light trap box" as shown above. If the sliding door of the box is opened to expose the interior system, even though there is a constant interior bright LED light attached to the lid of the cylinder, the recording mechanism is activated.

Next operation is to copy the 63 HD video recordings mentioned above onto a data disk and then erase the HD. We will then be ready to activate Phase 2 with Norma.

Good news! Victoria Alexander has just emailed me her willingness to participate in Phase 3. We'll design and cross that bridge after Norma has completed Phase 2 to her satisfaction.

Thursday, 21 January 2010
Norma and I have communicated by text message today and will talk on Saturday about Phase 2, Stage 1. After we flesh out a mutually agreeable strategy, we will implement it next week beginning Monday, 25 January..

Sunday, 24 January.
Norma and I have talked and agreed on a strategy for RPK Phase Two, Stage 1. (See following post.) Before Norma and I came to agreement yesterday, I invited my young LANL physicist friend Quinn, whom I first met at St. Dimitri's a little over a year ago and who was our local witness to Phase One of the experiment, to visit the newest experimental setup and discuss my intended current strategy. I had wanted to do this before speaking to my Crystal Group friends the next hour and before my conversation with Norma. It was my Crystal Group who helped me shape the new strategy after the unexpected results of Phase One, RPK Party. Quinn is an interested skeptic and the perfect on site technical witness. He is familiar with the equipment and technical challenges of the current setup and had an important suggestion about a third camera view.