My first attempt to move the red disk 5:41 p.m. CDT to 6:41 CDT 1.10.12. Here is a chart of the minute during which the red light came on beside the letter E in the lower quadrant of the monitor: 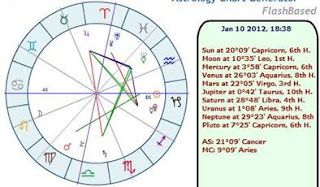 I saw a red light come on beside the E that is in the lower left window. My thought at that moment was that of the Butterfly Effect and I was breathing consciously and sending it to the red disk. I had been holding in consciousness the natal APPEAL of my Mean Node (Scorpio 24) in its outward activity, meeting the inward influence of Mars at RESOLUTENESS (Virgo 23) and where these two meet in reciprocity of influence -a unified message--in the present occurring transit. The crowds coming down the mountain to listen to one man-these are those who want to hear what he will say-those coming out from their high places to listen to the one in the valley of simple means, who simply would be heard. He is appealing and they are responding. Yet he must know illimitable patience and adroitness, as does the animal trainer. There can be no force, only encouragement and patience. He must simply keep doing what he is doing. He must be resolute in his patience that he will be heard and that what he is saying will eventually make a difference. Illimitable patience is that patience which cannot be limited. There is no negative association with it. Like God with us, his message is, "All is well. All is well." And so my thoughts and breath were this, "All is well. You, Red Disk, will move when you move. Until then, I will be resolute and patient in my appeal to you!" And I breathed. And the light went on beside the E. Equanimity! The synchronized meaning? Cancer 22, the breath (Ascendant):
A woman awaiting a sailboat:  EQUANIMITY - When positive, this degree is a sure insight into the meaning of chance events and the current drift of circumstance.(And when negative, senseless dependence on acidents of fortune.)
Creative poise and quiet range of perspective which give real power to the human soul, endowing it with its gift for sustained interest in the present situation and its constructive attitude towards each ramifying potentiality of things to be. Here man exalts his destiny as he is aware of the shps that may come in for him, and he learns that it is through the consummation of idea and not the pyramiding of facts that life achieves its more enduring reality.


Good morning, Eugene. Yes, we did the one viewing together on Ron's notepad. We saw the red light and white star appear three times during our viewing. We've had a wonderful time sight-seeing here! (It is my first time in NYC.) ...

Still pending is an examination of the MDV surveillance record to compare with Rebecca's and Ron's results of Table 2. Physicist helper Dr. Quinn M. is scheduled next Saturday (Feb 4) to help me with this.

In the meantime, I think I may have solved the puzzling artifact mystery on the MDV record! Last week during a most intense windstorm, I noticed the red recording lights of the MDV on and glowing. As I inspected the MDV video screen, both hanging objects were swinging significantly. The wind appears to be the culprit! It gets the house vibrating! I had not considered such an outer effect would have such a significant inner effect on our secure RPK system!

Now, we have to inspect the MDV record to separate this wind effect from a possible RPK success. An RPK success would be when only when one object was moving and the other was not. Next Saturday, we will find out!

Rebecca, last night (3 Feb) my young physicist friend Dr. Quinn M. came over to help me examine the MDV record and compare them to the results of Table 2. We were excited that we might see just one of the objects moving, which would have been a major scientific event! Alas, there was no correlation. Even though the recording cameras had been triggered for reasons we cannot yet explain completely (wind on the house will trigger the cameras sometimes) there was no evidence of either of the objects moving at the dates and times given in Table 2.

Rebecca, last night (3 Feb) my young physicist friend Dr. Quinn M. came over to help me examine the MDV record and compare them to the results of Table 2. We were excited that we might see just one of the objects moving, which would have been a major scientific event! Alas, there was no correlation. Even though the recording cameras had been triggered for reasons we cannot yet explain completely (wind on the house will trigger the cameras sometimes) there was no evidence of either of the objects moving at the dates and times given in Table 2.