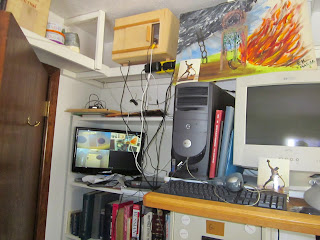 This post will make no sense to anyone not familiar with and sympathetic to the RPK Experiment.

Astral engineer Semyon Vendrov came to visit us in Los Alamos and inspect the RPK experimental set-up. I became all but certain that our equipment had broken down a year ago, when he first attempted to move the target object  via remote viewing from his home in Nevada.

This was not unlike our first attempt to perform the experiment in 2009, where Norma C was the remote viewer, working from Jack Houk's home in Huntington Beach, California, about a thousand miles away. At that time, instead of directly affecting our target here in Los Alamos, she and her support group, applying Jack Houk's "PK Party" approach, affected instead Jack's water heater, by moving it off its base! [Note similarity of the image of the water heater to that of the cylinder housing of the RPK experiment.] Obviously the energy involved was scattered and misdirected. That is what lead to abandoning the "Party" approach and to work with an individual remote viewer, sans support group energy.

We now have a team of 4 or 5 gifted remote viewers waiting for our current equipment to be ready.  Team member Quinn, a talented physicist, has generously contributed new recording motion detection equipment to the experiment, which he installed last Monday (5/18) evening (see photo), which now needs refined adjusting.

Semyon is now on his way back to Nevada and will be ready to try again soon. It is his task to work out the astral engineering protocol, so that we may test and vet others interested in becoming team members.

Our enterprise is governed by that which does not fear or react, but which does respond to inquiry and request when approached with the values of love, courage, humility, intelligence, commitment and patience.

Posted by Eugene at 9:23 PM No comments: