In my April 29 telephone conversation with Caroline Cory (at George Weismann's introduction), I was surprised to learn that Caroline, herself, was capable of "micro" RPK (telekinesis?) in that she could affect electronic targets at significant distances, such as she being in Los Angeles and able to affect instruments in San Francisco at will. She sent me three email attachments showing multiple examples of evidence.

As we talked during our first conversation, I became aware that her approach deals with "the nature of consciousness", whereas my approach had from the beginning (1965) dealt with "the concept of mass", as defined by physics. Then, a light began to dawn as I recalled the last email discussions with Kyra about some of her strange experiences in interacting with my equipment, which began to sound similar to Caroline's more recent experiences in interacting with the equipment of her colleagues. Could this be significant? I think so.

It appears that both Caroline's and George's experimental experiences are dealing with small or "micro" effects, whereas mine is more "macro" in design. I discussed this with George in a subsequent Skype call and it occurred to us both that if one believes macro RPK is not possible, then it isn't for that person. Thus, could the issue really be one of belief or attitude? If so, then we are talking more about the nature of consciousness as well as a likely misunderstanding of the concept of mass. When Caroline became aware of Kyra's comments in the late RPK blog reports, she was impressed.

George asked me to contact two more people about this. I have not yet done so, but will. Others are coming into the picture on FB and other internet avenues. New teams may be forming.

Phase 2 suggestions for a new team:

1. Construct another RPK device, similar to my original. We ought to make a standard design for practical reasons, where several can be made for varying groups, depending on interest and location. It is simple and non expensive to construct.

I suggest its purpose be a "training" device where the objective is to identify a group of "influencers" who can teach others how to pass a "phase 2" test. That is, make one of the two hanging objects move without affecting the other. Successful Influencers will then be able to move to more advanced stages.

2. Recruit potential Phase 2 Influencers from those who are experienced astral travelers (beyond merely remote viewers). (Preferably non-military). I'm thinking of graduates from the Monroe Institute. (Perhaps there are other institutions that teach this capability?)

Interested readers of this far-out blog are invited to email me at enkovalenko@gmail.com.

20 May 2018.
Last night Birgitta and I viewed Caroline Cory's new documentary film, which we received via USPS from her earlier in the day. It's title: "E.T. CONTACT; They Are Here". 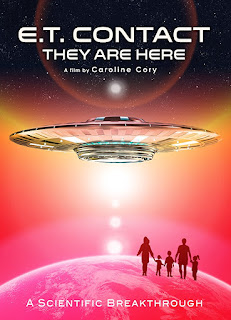 The film far exceeded my expectations by surprisingly connecting many, many dots in my own story. Clearly Caroline is on the forefront of the ET disclosure movement.

Later in the evening she sent me an email with photos of her most recent attempt to do an RPK experiment from her place in Utah affecting George Weismann's telekinesis device at his home in Oregon. They were convincing, especially after having seen her documentary, since George demonstrated his capability to move a calibrated hanging object within closed transparent container. Otherwise, I doubt I'd have been able to appreciate the significance of her photos.

Caroline has agreed to involve scientist members of her team in my Phase 2 by building a device similar to the one I recently took down and sent to the U of Utah special collections library. When she and they are ready, I will work with them to define a new protocol for at least four experienced micro RPK "influencers" who have agreed to participate and located in various parts of the world: California, Oregon, Utah and South Africa. The objective of Phase 2 is to develop a training protocol that will teach anyone to do macro RPK from any place in the world on a test object located at a specific location. Who knows what Phase 3 will be designed to do?!

Which brings up a related subject. See next post titled "Did Genesis Man Conquer Space?" 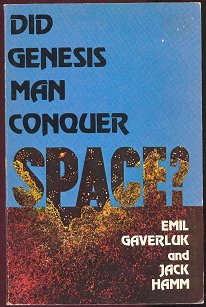 This book, published in 1974, is out of print. Birgitta ordered it for me 25 years ago just after we were first married. For reasons I am now embarrassed to say, I did not read it because I dismissed it as having been written by some far right religious fanatic. Only this morning in conversation at breakfast about who built the pyramids and why, did I learn that she got the book originally from her father. I hadn't remembered any of that!


UC Berkeley trained physicist Dr. George W. called me on May 6, 2018 to discuss my conversation with Caroline C. the previous Sunday (4/29) after having suggested earlier that morning that she and I get acquainted. It was uncanny timing--again.

To explain: after closing down the RPK experiment in March 2018 and sending the equipment to the University of Utah archives with suggestions for a phase two (should anyone be interested), I received a call from George, who had originally called me from his office in the Philippines in August 2013, after becoming aware of my experiment via the internet. He wanted initially to show me his own live version of what he called “telekinesis”, which was something I had been stubbornly, but unsuccessfully trying to do for over 50 years! (He had actually been trained to do this years earlier by Russian teachers at the St. Petersburg Bio-Sensory Institute!)

After George's original 2013 call and my witnessing (via Skype) his telekinesis device: a small, thin paper-like object slowly twisting on a fine silk thread inside a transparent "cone" on his office desk (while he continued talking to me!), I wondered then in my amazement if continuing my version of psychokinesis (PK) was now anything but a fool’s errand.

Nevertheless, something prompted me to stay stubborn. The significant difference between our two approaches brought a deeper sense of insight to my mind, although I could not yet verbalize it. (Even so, I kept remembering our first attempt in July 2009, where there had been an unexpected, apparently massive, but scattered result! See: https://rpkexperiment.blogspot.com/…/first-remote-pk-party.….)

After the above-mentioned first attempt at RPK on my apparatus at my place, we abandoned the "party" approach and focused on having a single "influencer" attempt to move just one of the two objects that were suspended within a closed, light-tight, air tight box, containing two motion activated cameras at right angles to record any movement at any time, without regard for witnesses and open to being viewed via the internet to viewers with ID and password.

In December 2013, after reviewing George’s and my versions on my RPK blog, friend Kyra Kitts suggested she thought she could make mine work after all when she learned that George could not do so when he came to my home in October 2013 to inspect my setup. Kyra and I then worked out a new protocol. See: https://rpkexperiment.blogspot.com/2013/12/rpk-system-reactivated-temporarily.html.

Using the new protocol, Kyra's attempts became critical because of her attitude of openness. During one of her sessions she succeeded in actually moving one of the target objects without affecting the other! No one else has yet been able to do this, among many around the world who had attempted to do this in real time bio-feedback terms. Although the successful effect of one of her sessions was small, it was clearly detected and recorded by the equipment's movement-activated cameras. These data are now on the equipment hard drive currently at the U of Utah special collection archives.

[NOTE: I was unsuccessful in copying that hard drive evidence onto a disk or thumb drive to present in this space. That will require someone more tech-savvy than I to access and operate that hard drive.]

To be continued... Phase 2 protocol suggestions