Bless you all for staying the course as we all managed to get through Round One of Phase 2 of the 3-object RPK Experiment! It has taken 6 months!
I had hoped to consolidate results this week to share with you all. But since my Navajo tech, Terry, is out of town this week (whose expertise I need to copy all your electronic runs onto memory sticks or disks to compare the electronic record with your respective log notes) I am delayed in producing a final report. There continues to be puzzling effects, which need to be accounted for.
A few days ago an RPK blog commenter named “Oracle” remarked that he/she was frustrated by having her/his smart phone misbehave while trying to communicate telepathically with a friend while texting at the same time. This gave me pause. When I asked Anita if she had similar experience, she said yes and with more than one friend. This may be an effect we need to be alert to in considering the above-mentioned puzzlings.
Am also having misgivings, not only about the current Night Owl surveillance equipment, but my own competence in understanding the settings. A few casual comments by some of you and others commenting on my RPK blog post have caused me to re-evaluate the internet-connected electronic approach. All this will need to be discussed with others, such as physicists George, Mike, Dean, Ed and Quinn.
Finally, last night I had a surprising 5-hour conversation with Larry, a newly discovered author right here in Los Alamos, who has written “Searching for Mind over Matter”, which has given me a whole new perspective (from a background of psychology and electrical engineering!) on this experiment. My sense is that Larry’s insights and experience will have much to say about redesigning Phase 3, should we want to continue that direction. I introduced him to the existence of the Exoconsciousness community, which he was unaware of.
More next week when Terry returns.
Posted by Eugene at 11:56 AM No comments:

RPK Phase 2 run D has finished! End of Round One. 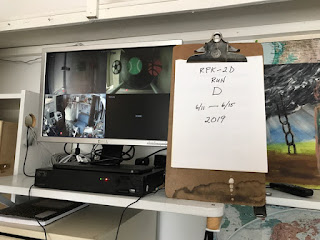 15 Jun 19. At last it is finished! Run D took a bit longer than previous runs this time because of unexpected interruptions. Also, Influencer D was able to use a Zoom biofeedback option, although it was touch and go for a time. (Interruptions knocked her off the internet a time or two.)

Next step in this Phase 2 thing is to compare all influencer logs to the DVR records for each run and report back here. Hope to have this done in the next week or two, as I can arrange expert help to evaluate this stuff. There have been surprises and technical puzzles. Not sure if those surprises are influencer caused or equipment malfunction. From my preliminary conversation with Influencer D before beginning her run, she made me wonder if the camera record by previous influencers may have detected stuff that deserved to be associated with the run, which may have looked like equipment misbehavior. Stay tuned!

Run E by the fifth influencer (in Albania) is still to be arranged. Not sure if we can use Skype or Zoom on this one.

End of Round One.
We have also decided to end this "Round One" with just four runs at this date, because of unexpected difficulties in international communicating. If we decide on a Round Two, we will reconsider run E influencer and other volunteer influencers who have heretofore expressed interest in this project.

17 Jun 19, 2:00 PM reply to comment by "Oracle", who wonders why he/she seems to have pk malfunctions with their devices with a particular friend when they attempt to communicate via telepathy and text at the same time. I have asked if he/she has the same problem with any other friend. This would be an interesting distinction if it were friend specific!
Posted by Eugene at 5:13 PM 2 comments:

INTRODUCTION
This protocol is offered to talented potential influencers who have volunteered to participate in this on-going experiment. The purpose of Phase 2 is to provide irrefutable evidence of MACRO (if not MASSIVE!) REMOTE PSYCHOKINESIS (RPK). Anticipated results will provide prototype training methodology for others who wish to develop their own RPK capability. Results are posted on a new [TBD] blog, which includes the following protocol steps:

Step 1.0. SET UP. The original RPK (Phase 1) device has been redesigned and rebuilt with help from generous colleagues near and far. [See https-//rpkexperiment.blogspot.com for January 29 through February 11, 2019.]
Step 1.1. A third video camera is strategically located outside the CORE and electronically linked to the CORE cameras so that any possible, extraneous external influence will be detected and recorded. Images from all three cameras appear on the MONITOR in a split screen, which is external to the core.

Step 2.0. ROUND ONE (3 to 5 runs). An initial several-week period without intentional influencer activity has been conducted to assure the system is stable and without false positive activity. A deliberate external disturbance (such as jumping on the floor near the system) may be applied at strategic times to calibrate the motion-detection camera system, where all target objects move together to trigger camera activity.)

Step 2.1. Five candidate INFLUENCERS, A, B, C, D & E, have been pre-selected for a first round of Phase 2 runs. Influencers are given one 48-hr time slot in which to influence the target. These influencer time slots are preceded and followed by a 24-hr null period, which remain unscheduled for any external activity. Time slots for specific influencer activity are protected from any other influencer, so that s/he may try personal methods, while keeping a LOG of personal attempts.

Step 2.2. Since the ULTIMATE OBJECTIVE of Phase 2 is to develop a teaching methodology for future influencers, each Phase 2 influencer is invited to keep a detailed log, which is to contain a record of the influencer's personal style of preparation and activity. These logs are encouraged to include a record of mood, personal techniques, attitude, etc. Personal thoughts, feelings, intentions, frustrations, etc. are all welcome information. Also expected is a description of the external conditions, including weather, temperature, comfort level, any background noise, distractions, etc. during a given run.

Step 3.0 PREFERRED EFFECT ON THE TARGET objects is that only one of the three objects is influenced by an easily identified motion, while leaving the other objects unaffected (motionless). A pendulum-like (swinging) motion is IDEAL for the chosen object. HOWEVER, we do not want to overprescribe what each influencer chooses to do! For example, if an influencer wishes to influence two of the three objects, then each object must evidence a clearly differentiated motion relative to the other objects. If all objects move alike, this is NOT interesting. If only one object moves without affecting the other, this is the most interesting! Crashing objects into each other would also be interesting! Let this be a fun, creative exercise!

Step 4.1. An email launch date and time is to be sent by the PHASE 2 Coordinator to a given INFLUENCER, who will then begin her/his personal LOG. At the end of the assigned 48-hour time slot, the influencer part of the RUN will be considered complete, which is followed by a 24-hr period of deliberate inactivity.

Step 4.2. At the end of a given RUN will be launched via email notification, per the above procedure, etc. This will continue until all ROUND ONE Influencers have completed their respected runs.

Step 4.3. Biofeedback Option. At the suggestion of at least 2 influencers, runs can be viewed in real time for up to two hours during the scheduled 48-hour time slot if arranged beforehand with the Phase 2 coordinator. A preliminary conversation via Skype or Zoom between coordinator and influencer is highly recommended, typically an hour or two before run launch time. The coordinator will perform a “calibration jump” so that the influencer can view directly how the objects move when disturbed by an external seismic event.

Step 5.1. At the end of a given RUN, the INFLUENCER will send an email account of the specific times and ways s/he attempted to affect a given object to the coordinator. When this is complete, the coordinator will alert the next INFLUENCER when to launch their respective RUN.

Step 5.2. At the end of a given RUN and null period, the TECHNICAL MONITOR will email to the coordinator a time-stamped account of all activity during this combined period.

Step 5.3.  All email messages from and to the Coordinator regarding all RUNs, will be copied to one or two TBD trusted, respected and independent scientific witnesses.

Step 6.0.  ANALYZING DATA. Technical monitors of the Phase 2 system will report any activity to a Central Coordinator, who will compare influencer log data for a given run. Positive or negative correlations between log entries and camera records of movement will be communicated to the specific influencer and the assigned referees.

Saturday, June 8, 2019. We are scheduled for Run D the second week of June upcoming. Apologies for the delay in communicating results to influencers B & C for their runs this past month, but we are having puzzling results and do not want to identify you until the puzzle is solved.

We are not yet sure if the puzzle is due to equipment malfunction or some unexpected external meddling. There is evidence of something happening in the electronic strip record of the surveillance system’s DVR, which does not track with video image movements of the target objects during each run. Please have patience with us while we wrestle with these technical challenges. Navajo tech colleague, Terry Begay, has taken a special interest in our project and is offering her time and expertise in helping us figure this out. Her Native American culture does not find such unexpected results surprising, only challenging.
Posted by Eugene at 2:10 PM No comments: